Time for vacation part 2! If you haven’t already, check out part 1 here.

Monday (day 4 of vacation) was a pretty fun day. We spent some time up at Corey’s office to pick up my reimbursement gift for housing him while he was in Pryor. Essentially, work was more than happy to buy me a laptop since they didn’t have to pay for a hotel room for two weeks! It’s an HP Chromebook 13, for those that want to know. One of Corey’s friends said something about it being called ‘The Spider,’ so its name is Arachne. I can’t find anything to back up the nickname, but the laptop has been christened, and so it shall remain.

But I digress. Back to vacation topics!

So most of the mental image I had of life at Google was formed based off of the movie The Internship. I’m pretty good about managing my expectations when my impressions are based off of works of fiction, but I just couldn’t help it this time. Granted, Corey had mentioned a few times how accurate some pieces of the film were in regards to life on Google’s campus, so maybe that played a role. If you haven’t seen the movie, I recommend it. It’s a cute movie in its own right, all things Google aside.

One of the pivotal scenes in the movie takes place in a room full of nap pods. Yes, you read that right. These are literally chairs that are slightly reclined and a cover swivels around to give you some semblance of privacy. We found of of these in the visitor center, so naturally Corey made me hop in so he could take pictures.

After perusing through the visitor center where the nap pod was, we went back outside to the Android sculpture garden. It’s exactly what it sounds like! They have the Androids for various operating system releases gathered in one place, since they know people want pictures with them. We snapped a couple pictures together, Corey snagged a couple of me making faces, and then we ate dinner on campus.

Tuesday was a day full of adventure; we spent the day in San Francisco! I made sure we planned to go see the Golden Gate bridge. We also made our way out to Alcatraz Island, and we stopped along Pier 39 as well.

The day got off to a slow start. We had tickets to go out to Alcatraz Island on the 12:30 ferry, so we had plenty of time to get up to SF and explore, right? Well, we forgot to take into account the fact that not everyone was on vacation like we were. We hit rush hour traffic on our way in 🙁 But once we parked and got settled there, we did end up having a bit of time to walk around!

The first thing we found was the Musée Mécanique, which was a museum dedicated to coin-operated games. It had all sorts of things, from pinball machines and arcade games, to autopianos and barber shop quartets. They had the machines you see in gas station bathrooms that claim to tell you how attractive you are. My personal favorite was the Sorting Hat!

Next, we wandered over to Pier 39. We walked down to where the seals like to chill, which is one of the things for which the pier is known. It also boasts restaurants and gift shops of all sorts, including one that claims to be Irish. I had to laugh, since we were actually in Ireland back in May! You can read about that particular adventure here 🙂 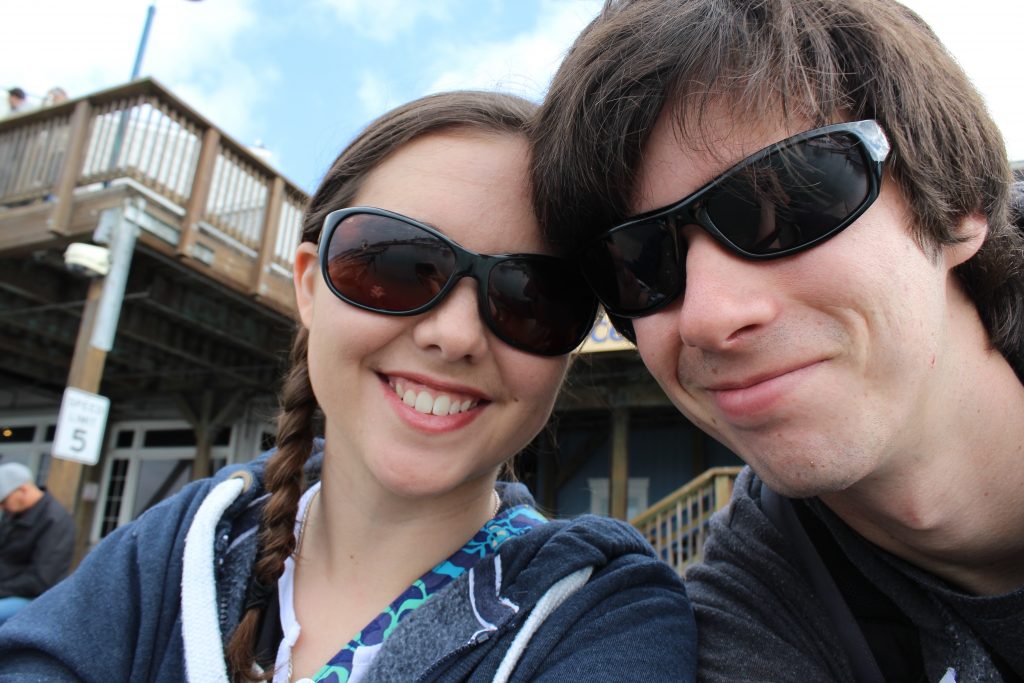 Of course, there was a Hard Rock SF that we had to stop in for tshirts. I’ve collected them for a while, and they’re good souvenirs for my little brother, too 🙂

We grabbed lunch and headed to the dock for the ferry. After a short ride over, we landed on Alcatraz Island! The whole island was open, and you could take an audio tour through the cell block itself. We walked up and saw the old power plant, and then went around the other side of the island to catch a view of the San Francisco skyline!

The interesting thing about being in a tourist-y spot like that is the people you interact with, and sometimes asking them for help taking pictures is a gamble. We ran into one couple that asked us to take their picture with the view of SF, and they were using an iPad to take pictures. When we asked them to return the favor, I was pretty confident that they could get us a good picture on Corey’s camera. That’s what you see above! On the other hand, we were snagging a picture with the sign for the island, and a dad with his family offered to help. Rather than pressing the shutter button, he pressed the viewfinder button and didn’t actually get a picture. It’s a totally understandable mistake if you’re using an unfamiliar camera, so we weren’t upset at all. We snapped a picture of their family for them as a thank-you, and we went on our way! No big deal 🙂

After the island, we hopped over to the Golden Gate bridge! As a civil engineer, the iconic bridge had to be on my must-see list while in the Bay area. We drove over to the welcome center on the south end, but the parking lot was completely full, between the cars and the tour buses! So we drove down around the corner to a different parking lot with free parking (welcome center was paid parking), the same view of the bridge, and far fewer people!

That pretty much wraps up part 2. Stay tuned for part 3!